How old is Markella Kavenagh? Meet The Lord of the Rings: The Rings of Power’s Nori Brandyfoot, Markella Kavenagh is playing the role of Nori Brandyfoot, who is the daughter of Largo and stepdaughter of Marigold. This series was developed by J. D. Payne and Patrick McKay for Amazon Prime Video. This series is Based on the novel The Lord of the Rings. 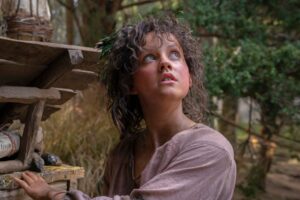 Markella Kavenagh is an Australian actress. She is best known for her starring role as the harfoot Nori Brandyfoot in The Lord of the Rings: The Rings of Power. She is 22 years old beautiful actress, She made her first professional debut as an actress in 2018 as Cindi in the Romper Stomper TV series. She will also feature in the upcoming TV mini-series Bad Behaviour, which is currently in production. She is one of the cutest characters in The Rings of Powers.